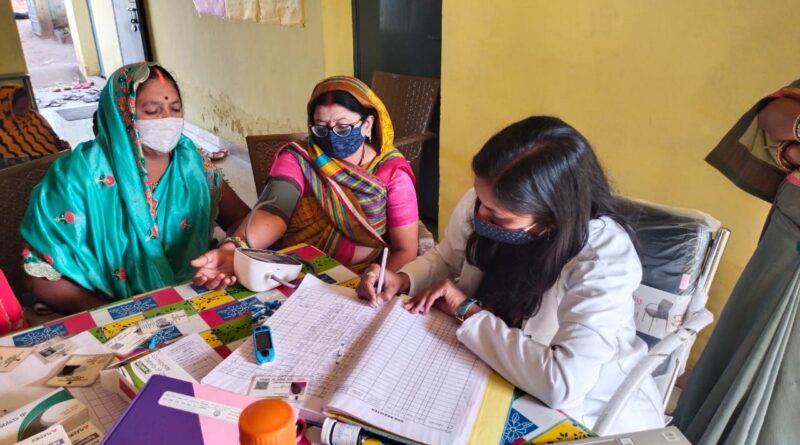 This International Women’s Day, here is the story of a 29-year-old CHO who is bringing attitudinal change about government health services in a remote Chhattisgarh town

Raipur, March 7 : Twenty seven-year-old Satyavati Sahu assumed the charge as a community health officer (CHO) at the Health and Wellness Centre (HWC), Sankara, in late 2019.
However, in just over two years, the HWC has seen the footfall going up from 150 between 2017 to 2019 to over 9,000 in 2021-22. While the COVID crisis and increased range of services have played their part in bringing forth this spurt, CHOs like her also deserve a fair share of credit for being agents of change, believes Satyavati.
This transformation wasn’t easy. The new role for this nursing graduate was baptism by fire. The HWC had just expanded its range of services from two to 12, putting more delivery and execution responsibilities on the new recruits like herself. Soon the COVID-19 crisis hit and made the challenge even more daunting. Being the single mother of a three-year-old didn’t help matters.

“When I first went there, I noticed that there was a lack of faith in the government medical system and outdated beliefs about health, especially in pregnancy and other women’s health-related issues, that dominated the discourse. I remember one of my earliest encounters was with an ex-sarpanch with diabetes and high blood pressure whose family was unwilling to give her pills from the HWC, but I persuaded them to opt for those. Soon they acknowledged the fact that the government health centres are just as good or even better,” says Satyavati.

Many such behavioral changes were to follow. Satyavati says she was undaunted unrelenting when it came to changing people’s outlook about the government systems or changing public perception. “In many cases, family members themselves were against institutional delivery for women. I had to counsel them patiently and won them over. Sometimes I was even accused of abdicating responsibilities for merely transferring complex cases to District Hospitals but I know that brickbats come and go, what is paramount is the life of the mother and babies,” she adds.
Then how did she get around the problem? “Regular followups and relentless pursuit,” she says. “I continuously tracked the progress of the women, kept telling the families about the safety factors associated with institutional deliveries and the importance of expertise that senior doctors at the HWC or higher insitutions provided. Slowly and steadily, many came on board,” she says.

Her biggest success story and her biggest regret are also from this area — ensuring safe delivery and proper early health of a child whose mother had lost another baby just months ago and failing to prevent a miscarriage despite her best efforts respectively.

“I am a mother myself and my maternal instincts kick in each time I see a mother and child. And I am trying my best to inculcate this in the mitanins and other health other health care workers under me,” says Satyavati.
The job, of course, is far from complete and an increasing number of patients will bring resource-management challenges, but she remains determined as ever.

“People are ditching private hospitals in large numbers because there is a new-found belief in the state’s services. I have always pushed my limits and will continue to do so,” Satyavati says.